How did I get started?

At the age of eight I wrote, directed and starred in a puppet show for my class at school. My first long story 'The Clue of the Magician's Scarf' was written at age eleven. (Spot the Nancy Drew influence!)

Although trained as a teacher, I still hoped to write children's books some day. When I began to have children of my own, my husband encouraged me to take a writing course. Visiting Barcelona, I was inspired by an amazing sound and light show at a fountain, and ended up writing a story about a boy with a birthmark who thought the fountain could change him.

Some writer friends invited me to attend the Bologna Children's Book Fair, where I handed the Barcelona story to the editor of Lion Publishing, Pat Alexander. She loved it. Lion published ROBERTO AND THE FOUNTAIN OF LIGHTS (which became ROBERTO AND THE MAGICAL FOUNTAIN in the paperback edition), and I was a published author! But that was only the beginning.

People sometimes think if you've been published, everything's easy after that, but they're mistaken. Writing is a lot of work! But it's also extremely fulfilling, and I can't imagine not doing it. 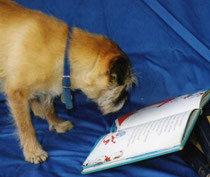